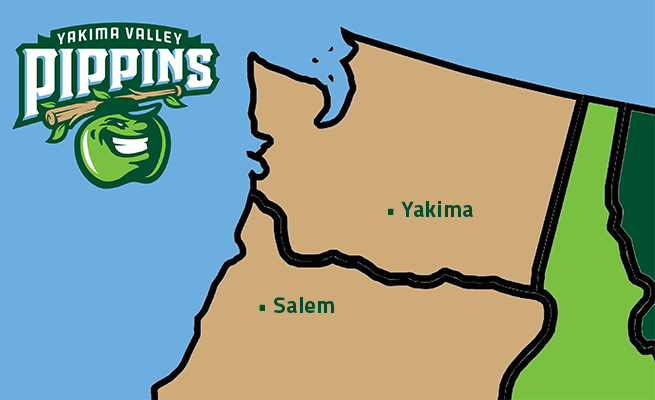 It’s often been said by those inside the game that the baseball world is very small. As widespread as the game is across the country on Little League fields, high school and college fields, and in professional stadiums, baseball has maintained a decidedly intimate feel with myriad small-town connections.

The sport reaches deep into communities, spreading tendrils that intertwine with those in other counties and states who share a love for a game that brings back those memories of simpler times. An example? Consider the cities of Salem, Ore., and Yakima, separated by 230 highway miles but tied together by threads of baseball history.

The Senators were the first professional baseball team in Salem in 1940. Their first game that year brought in a crowd of 4,865 fans. At the time, it was the largest crowd ever for a sporting event in Salem.

The Senators’ opponent on that first night was the Yakima Pippins, the first professional baseball team in Yakima. The Pippins were founded in 1937. The current Yakima Valley Pippins, who will start their seventh season this summer in the West Coast League, is named in honor of that original team.

In 1961, the Senators were renamed the Salem Dodgers, an affiliate of the Los Angeles Dodgers. As the years rolled by, Salem was renamed a few times and played in the Northwest League as affiliates of the Dodgers and the Los Angeles Angels and even as an independent team.

In 1988, the Salem Angels changed their name back to the Salem Dodgers, and again became an affiliate of Los Angeles’ Major League team. Two years later, the Salem Dodgers relocated to Yakima and became the Yakima Bears. That move returned professional baseball to the Yakima Valley for the first time since the mid-1960s.

In 1993, the Bears moved to Yakima County Stadium, current home of the Pippins. After the 2012 season, the Bears left Yakima for Hillsboro, Ore., and became the Hillsboro Hops. The Pippins debuted on June 6, 2014, in front of 3,209 fans.

The Senators are being reborn this year as part of the four-team Mavericks Independent League, which will feature non-drafted and released professional players. The league also features the Salem-Keizer Volcanoes, which played in the Northwest League until the reorganization of Minor League Baseball teams and leagues late last year.

The game was mostly absent from the country in 2020, but baseball marked its time to return, between cities in Oregon and Washington, across the country and around the world.