Welcome to Greensboro’s First National Bank Field, a central North Carolina locale with city skyline views. The ballpark is home to the Grasshoppers, but adorable bat dogs have long had a presence as well. 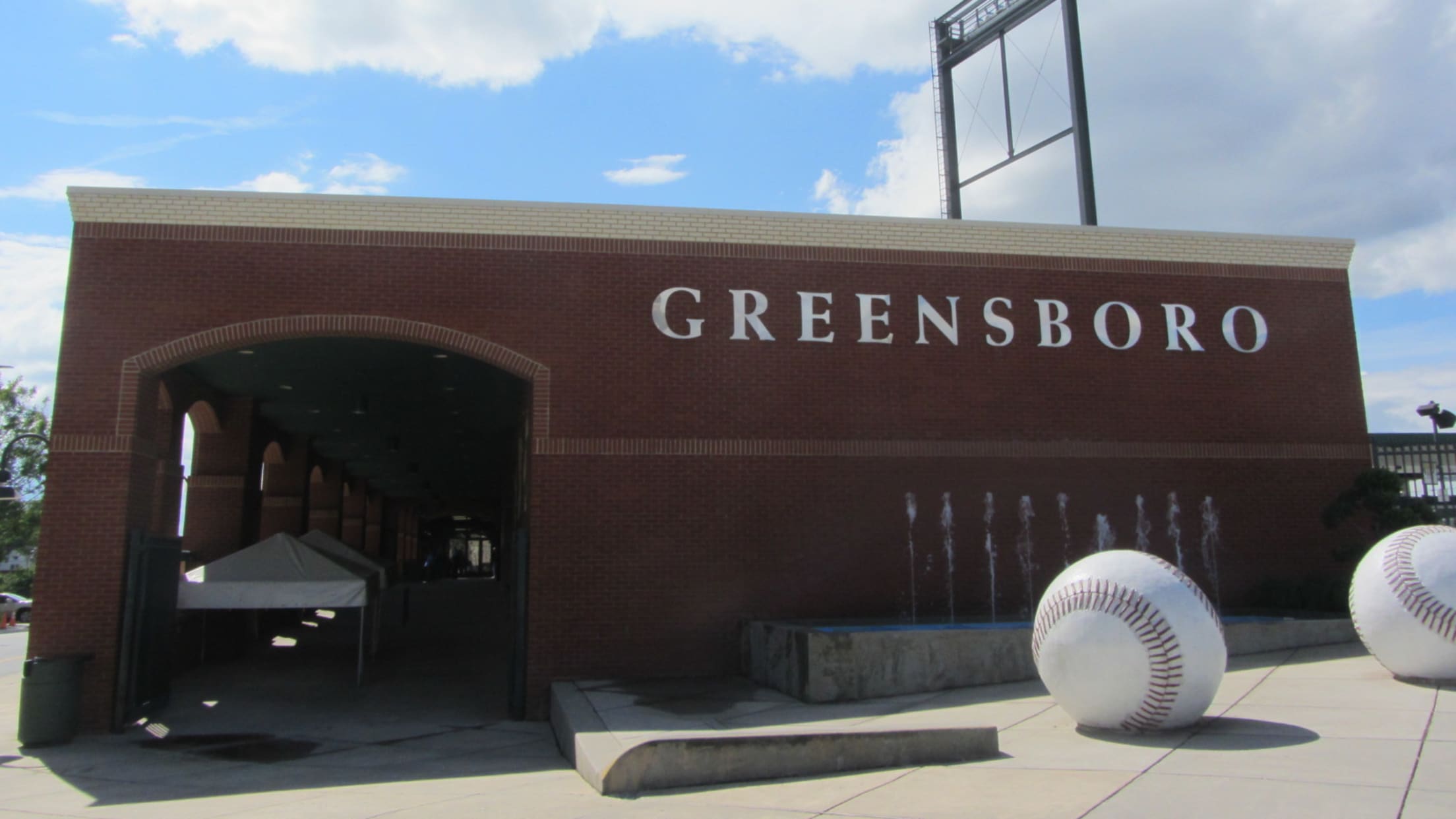 North Carolina is a hotbed of Minor League Baseball, currently home to 10 teams. Greensboro, located roughly in the center of it all, is one of the state’s most deep-rooted locales when it comes to our National Pastime. Professional baseball in Greensboro dates back to 1902; since then, far more often than not, a Minor League team has called the city home. 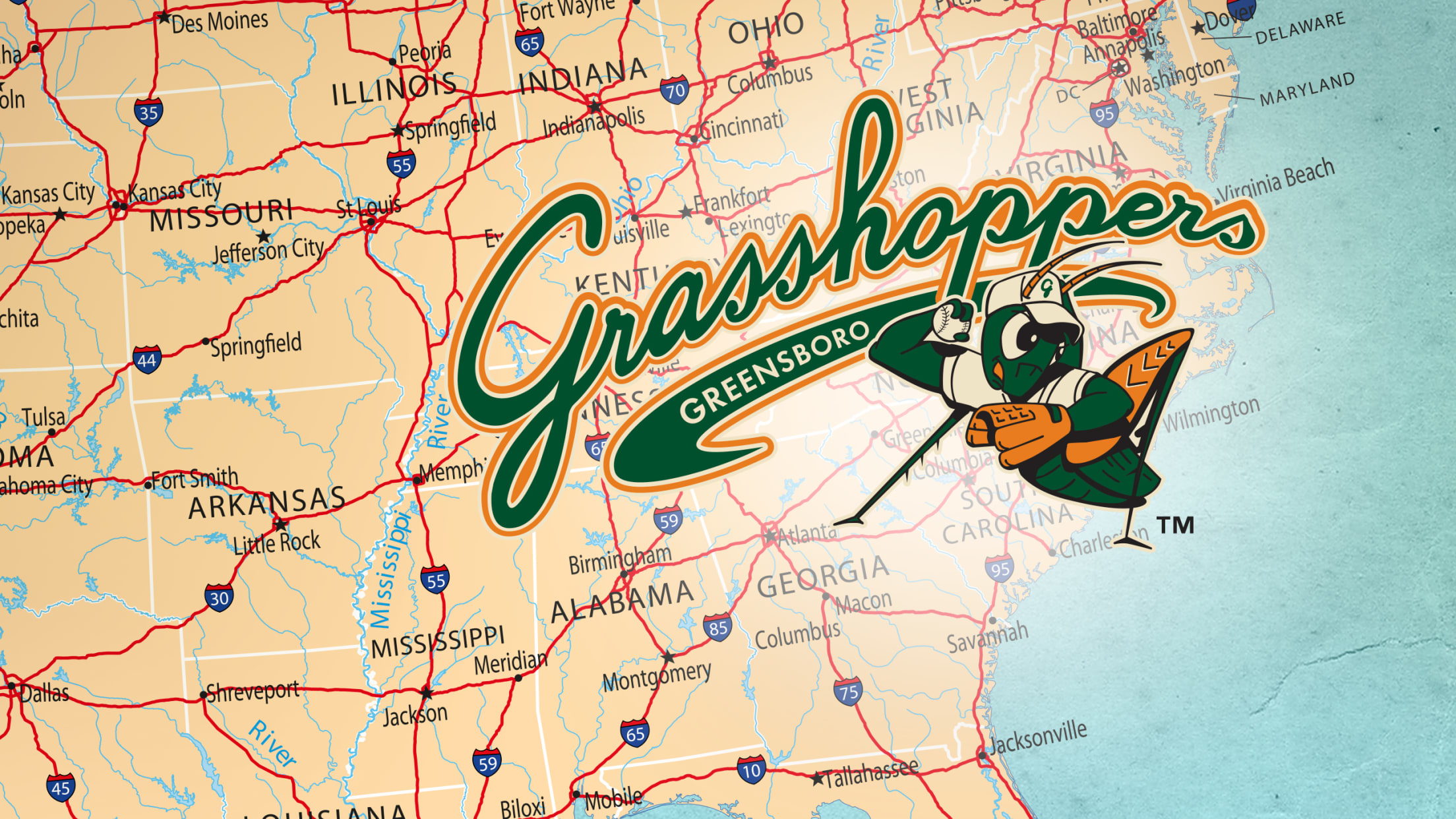 Greensboro is a long-time member of the South Atlantic League, a Class A circuit that was reclassified as High-A prior to the 2022 season. Greensboro’s current local nine, the Grasshoppers, were established in 1979 as the Hornets. The team changed its name to the Bats in 1994 before assuming the current moniker in 2005 (in conjunction with the move to their current ballpark). The Grasshoppers’ affiliation with Pittsburgh began in 2019, following 16 seasons with Miami. The New York Yankees have also played a substantial role in the team’s history, maintaining an affiliation from 1980-84 and again from 1990-2002. Derek Jeter played for the Greensboro Hornets in 1993, committing a South Atlantic League-record 56 errors. 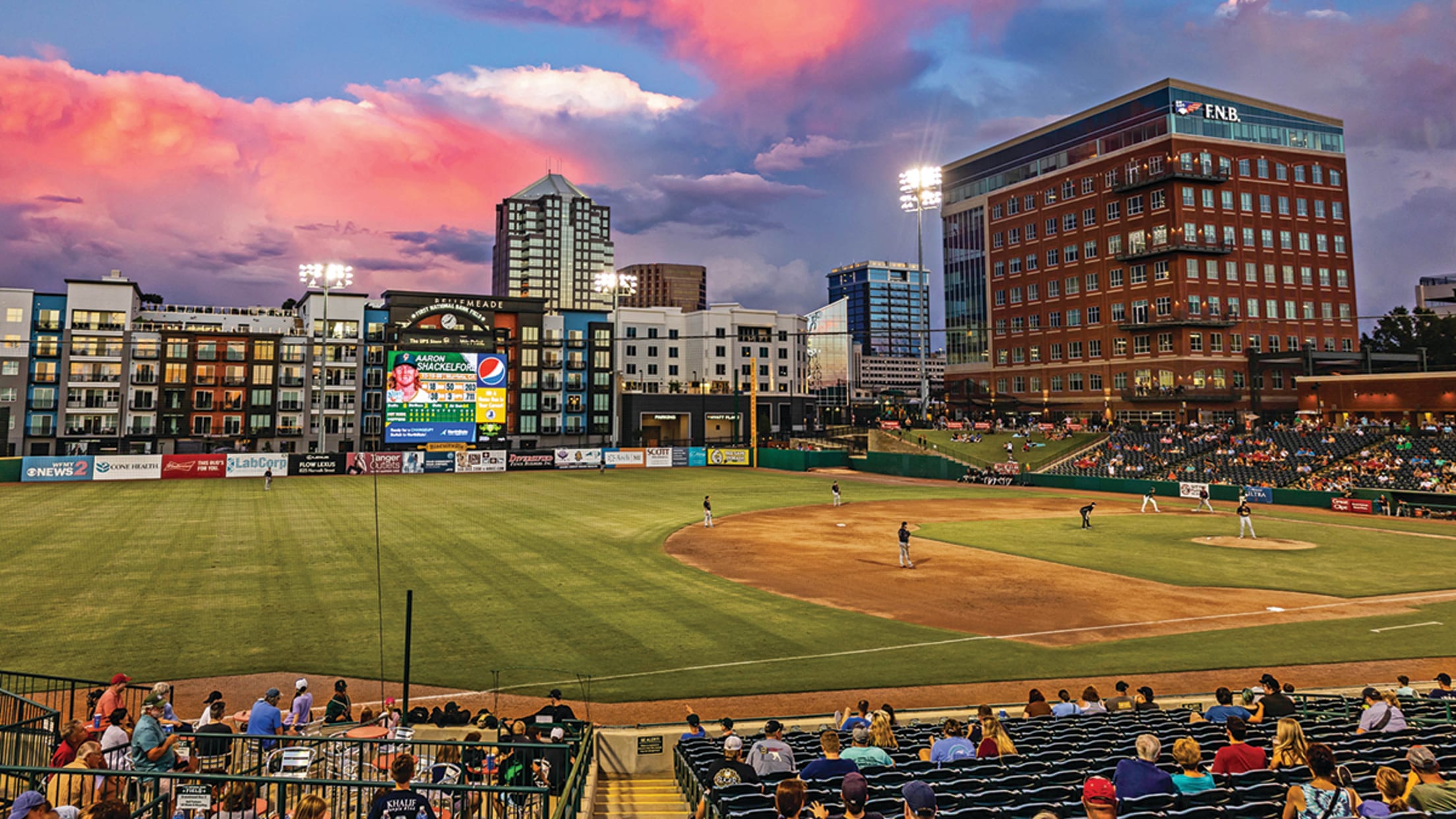 First National Bank Field, originally named First Horizon Park, opened on April 3, 2005, with an exhibition game against the Florida Marlins (then the Grasshoppers’ parent club). Located in downtown Greensboro and featuring a superb view of an ever-evolving skyline, the ballpark represented a marked improvement over the team’s previous home of War Memorial Stadium. That venerable facility, which opened in 1980, is located approximately one mile away and still serves as the home of the North Carolina A&T baseball team.

Though it’s a downtown ballpark, First National Bank Field has a large footprint inside and out. Fans approaching the ballpark from the first-base side do so amid a well-manicured walkway adorned with Grasshoppers-specific decor. The home plate entrance is imposing and stately, as it showcases a multi-level brick exterior. Access to the ballpark is gained via a staircase located beneath three rounded archways. 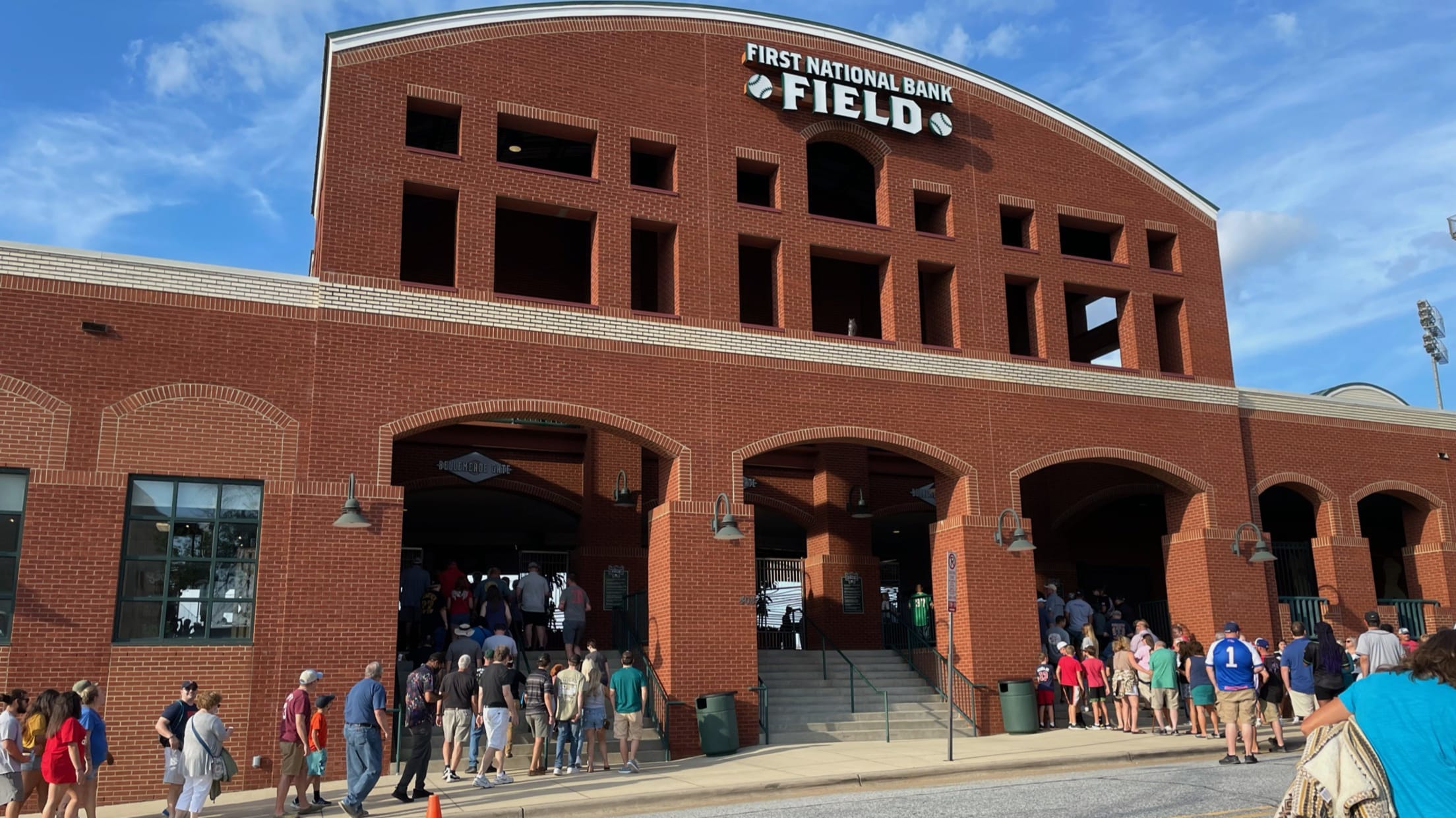 The Greensboro skyline looms beyond the ballpark, resulting in a far-above-average gameday view. One of the most recent additions is an office building in right field, on the premises of the ballpark itself. Its occupants include naming rights partner First National Bank.

No matter where you are in the ballpark, there’s plenty of room to move thanks to a wide concourse that envelops the vast majority of the facility. The seating bowl stretches into shallow outfield on both sides, giving way to lawn seating on the third-base side and private grandstand boxes on the first-base side. Moving toward the outfield from the grandstand boxes, one finds a shaded bar, a picnic area and additional lawn seating.

As for the in-game experience, Greensboro has long gone to the bat dogs. The team’s latest featured canine is Willie Mae, who follows in the footsteps of Miss Babe Ruth, Master Yogi Berra and Miss Lou Lou Gehrig. Wille Mae is joined at the ballpark by Little Jackie Robinson, a daily fixture in the front office. 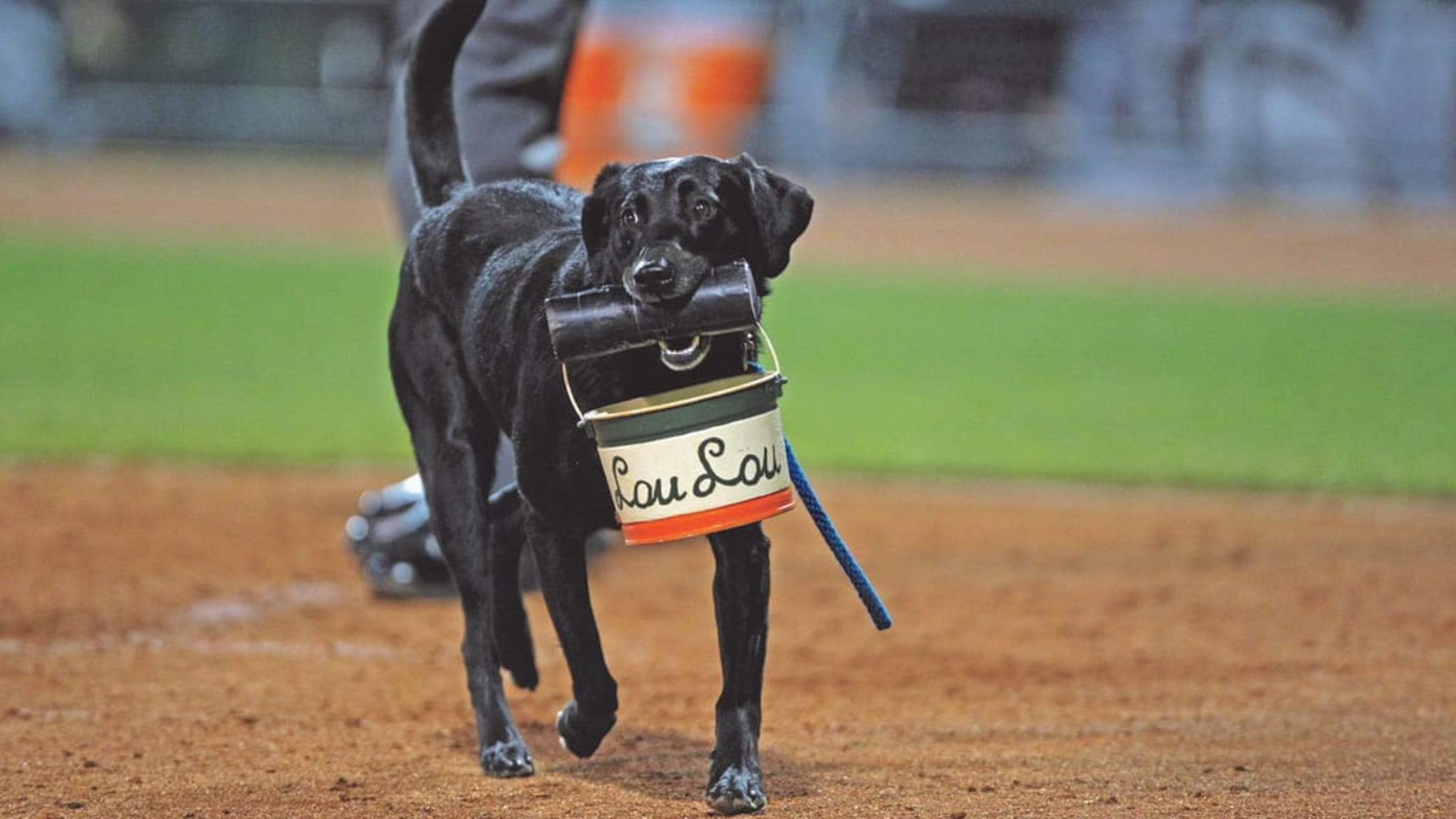 First National Bank Field has three concession stands as well as a variety of kiosks, serving up the basics and then some. This being North Carolina, barbecue appears on the menu in the form of sandwiches, plates and nachos. At the Hoppin’ Hound Dogs stand, whimsically-named frankfurters abound. In order to determine a favorite you’ll have to try them all.

Greensboro is situated within Guilford County. Guilford the Grasshopper is situated within First National Bank Field. Guilford, who has a tuft of orange hair and two prominent antennae, is the strong and silent type but his highfalutin antics keep the fans buzzing and chirping from the first pitch to the last. 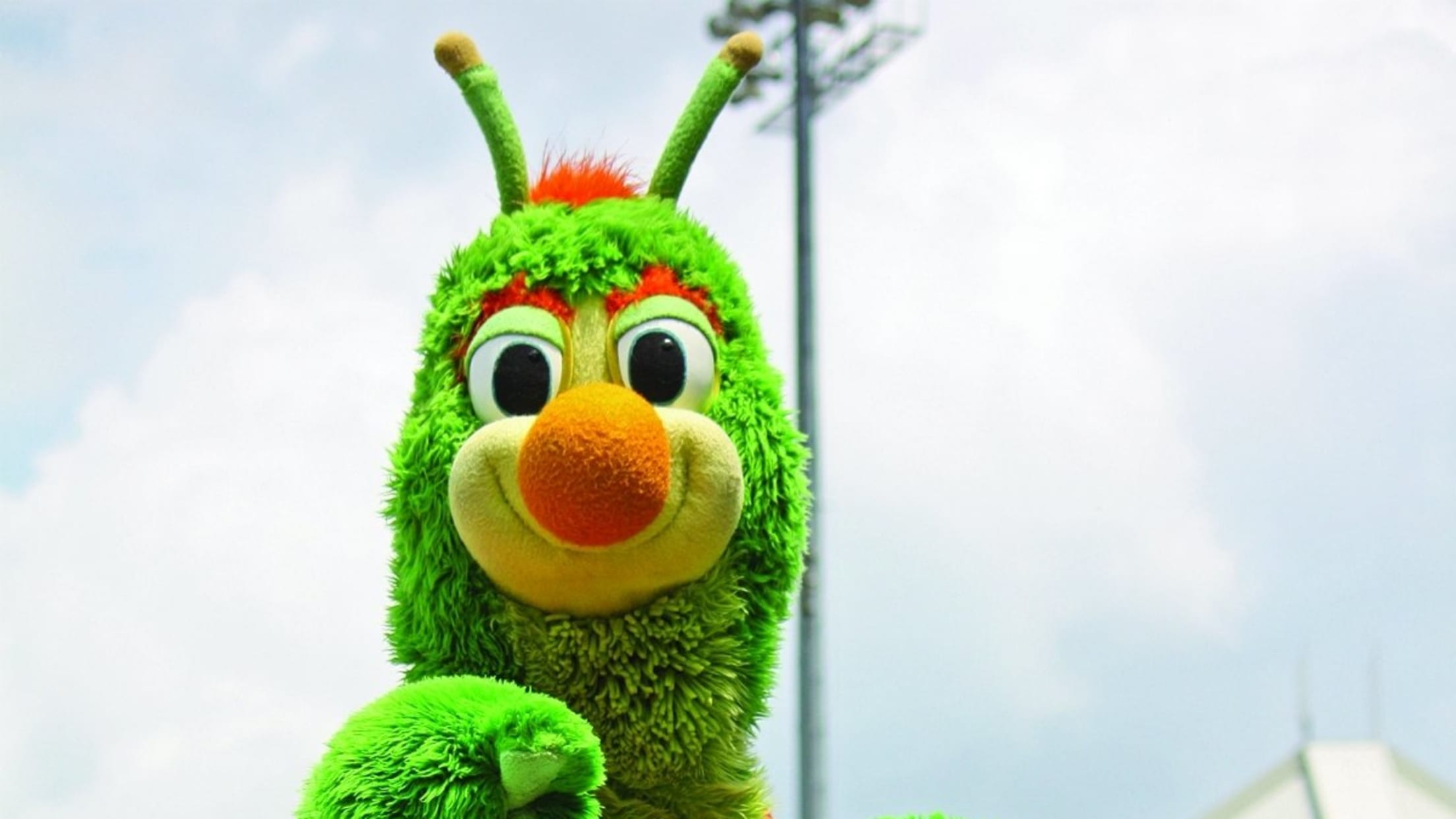 Greensboro played a huge role in the Civil Rights Movement, as a result of the sit-in that took place at the Woolworth’s lunch counter in 1960. The building where the Woolworth’s stood now houses the International Civil Rights Center and Museum. The lunch counter, since restored, is preserved in its original location. The ACC (Atlantic Coast Conference) was founded in Greensboro, and is still headquartered there. Visit the ACC Hall of Champions to learn about its history and pay homage to its greatest athletes. Ferroequinologists, better known as train enthusiasts, will want to check out the recreations of area railroads on display at Carolina Model Railroaders (a chapter of the National Railway Historical Society). The Rich Girls Museum, though perhaps not a museum in the traditional sense of the word, calls itself “the most viral trending selfie museum and first Black-owned selfie museum in the world.” Do it for the gram.

The best known writer to have come out of Greensboro is William Sydney Porter, better known as O. Henry. This prolific short story writer, a master of the ironic twist, is immortalized via a triumvirate of statues in downtown Greensboro (a short walk from the ballpark). 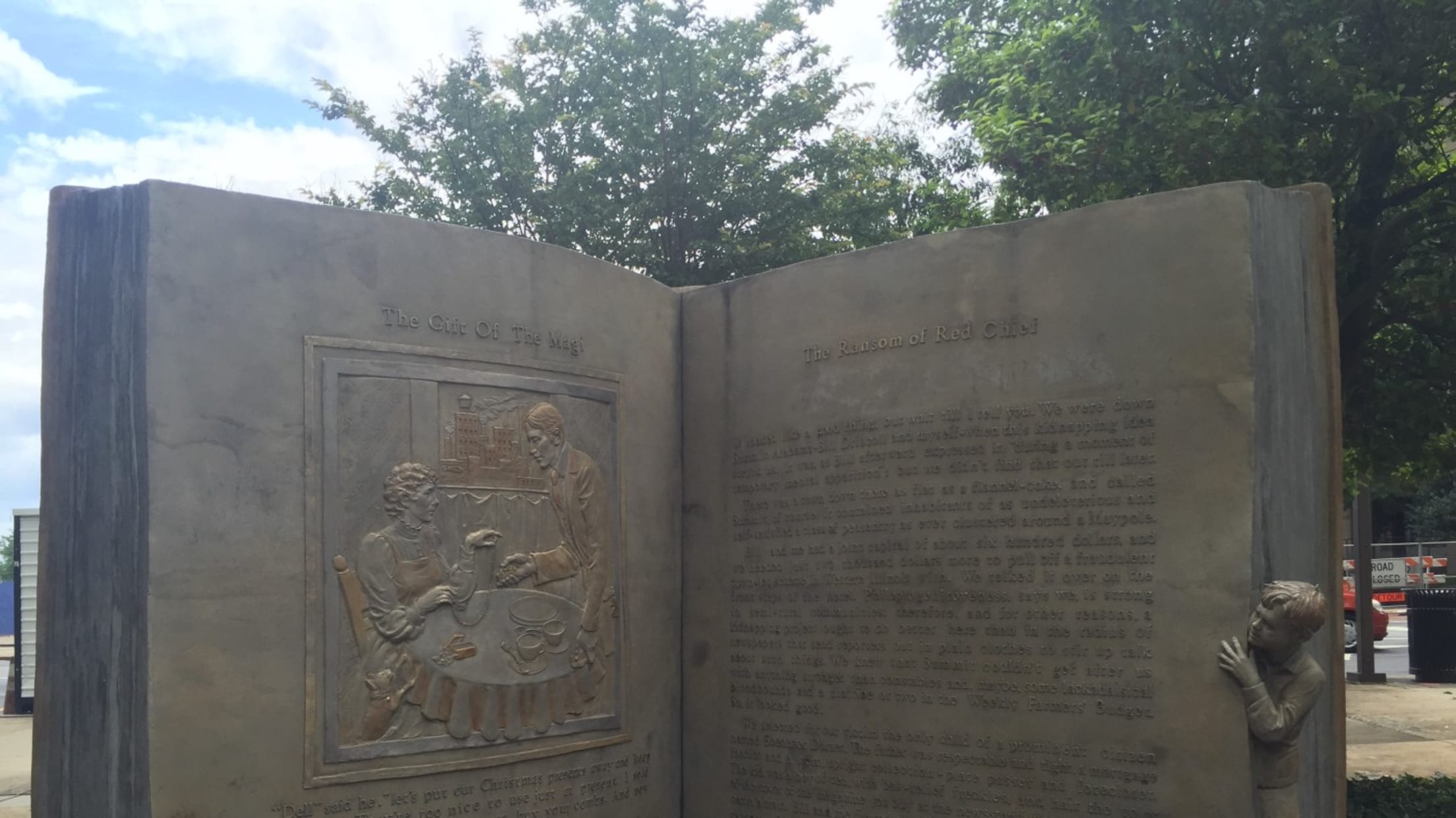 A tribute to O. Henry in downtown Greensboro.

Joymongers, a brewery located a close walk from First National Bank Field, is a great option for pre or postgame small batch beers. Craving a beer and a burger? Fisher’s Grille offers pub food par exellence. Barbecue options abound, of course. Country Barbecue is a perennial favorite. For high end cuisine served atop a tortilla, visit the ridiculously tasty (and ridiculously named) Crafted the Art of the Taco.

First National Bank Field is, not surprisingly, in close proximity to many downtown hotels. Other options include the Biltmore Greensboro and, in a not-particularly-ironic twist, the O. Henry Hotel.

The Grasshoppers are in the center of North Carolina’s endlessly fertile Minor League Baseball scene. The Winston-Salem Dash are the closest team to the Grasshoppers, located just to the west. Head further west (and south) to see the Kannapolis Cannon Ballers, Charlotte Knights, Hickory Crawdads and Asheville Tourists. Head east (and south) for the Durham Bulls, Carolina Mudcats, Fayetteville Woodpeckers and Down East Wood Ducks.

The Road to Pittsburgh

The Pirates’ system starts in Florida and then progresses to central North Carolina, central Pennsylvania and central Indiana before culminating in Pittsburgh. 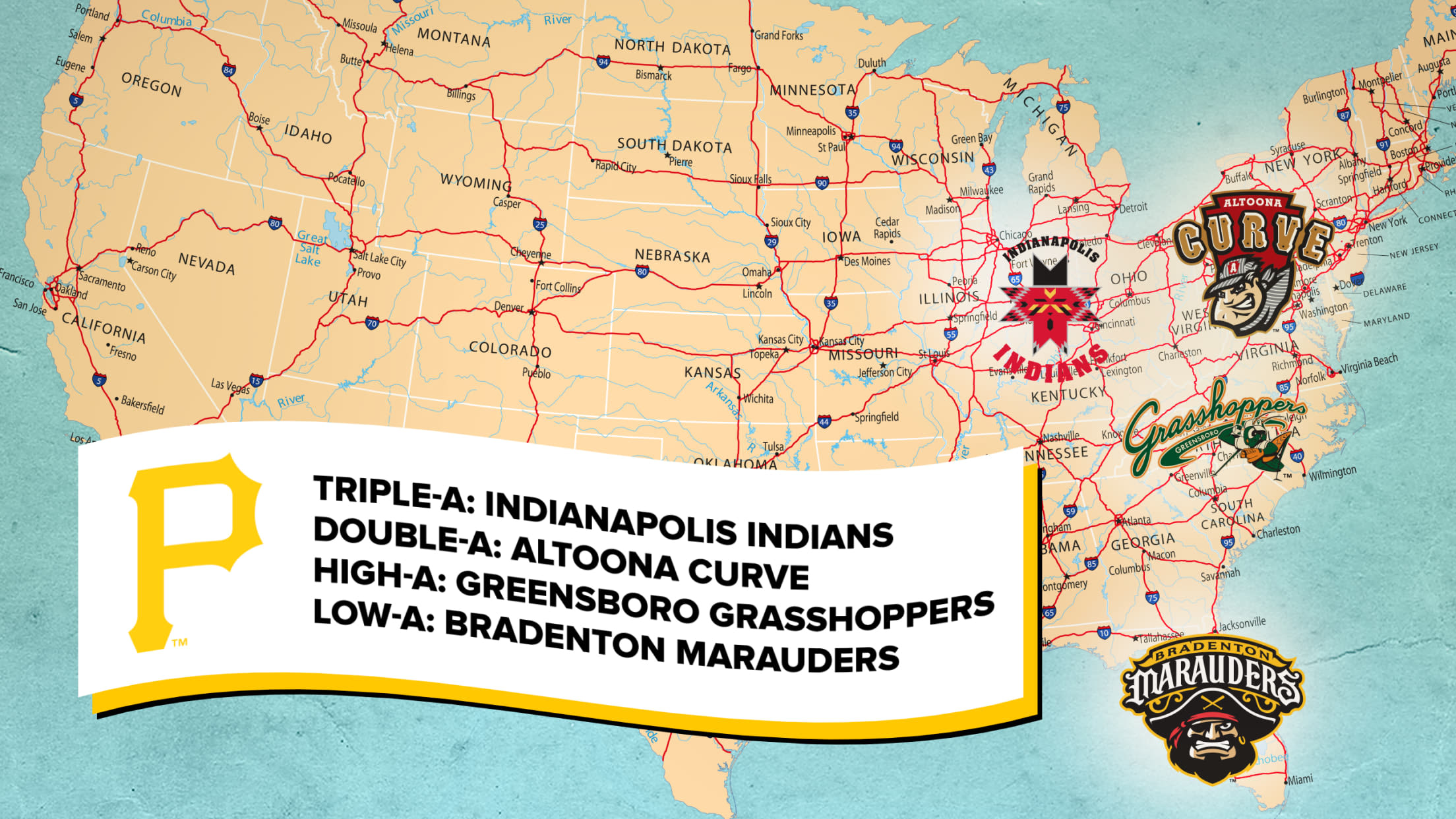 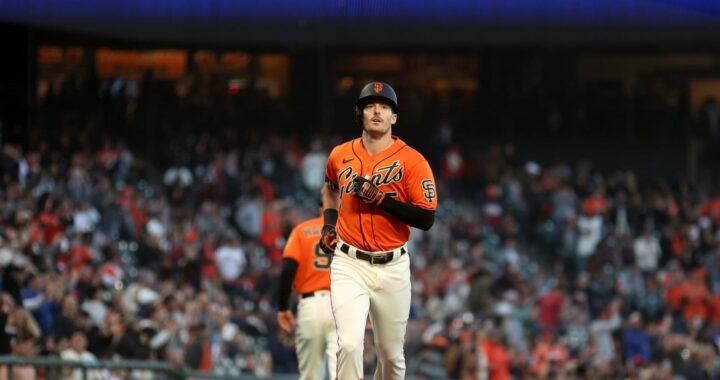 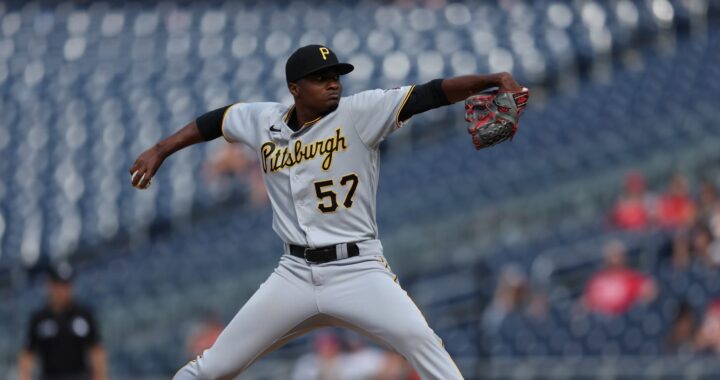 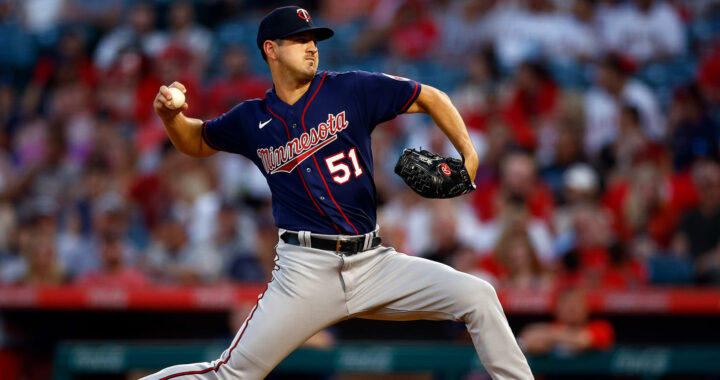